Peter Hammill is very definitely not a ‘Canterbury Scene’ artist, so you might wonder what a review about him is doing here. Well, please indulge me: he was one of my musical great loves around the time I started a Canterbury scene fanzine – and the Hammill/VdGG fanzine ‘Pilgrims’ was a major influence on me doing so. If you scratch hard enough you might find some links via Guy Evans’ involvement in Mother Gong, Jakko’s appearance on a Long Hello album, Hammill producing a Random Hold album (featuring Bill MacCormick). But that’s not really the point – for me, a Hammill appearance cannot pass by without some sort of comment…

It’s been a long time since I saw a Peter Hammill solo gig. A couple of triumphant Van der Graaf Generator concerts a decade or so ago, around the time that band still had their classic 4 piece line-up, was as close as it got, contrasting with a time in the Nineties when Peter Hammill tours seemed to come around every couple of years. The ageing process, serious illness and I suspect a related slowing in the creative juices, means that Peter Hammill performances are relatively few and far between these days. I almost didn’t go to the gig at the Stoller Hall, a new custom-built concert venue at the Chetham school of music, near Victoria Station in the heart of Manchester, mainly for fear of being disappointed. Hammill gigs are notoriously error-strewn, a bit of a rollercoaster and it’s always slightly amused me that many of his concerts take place at places of musical excellence (such as the Royal Northern College of Music or the Royal Festival Hall). This artist, for all of his many virtues, might struggle to get a gig with too many bands on the basis of his instrumental prowess alone, such is his often approximate mastery of piano and guitar.

Hammill’s physical appearance was something of a shock – a testament to passing years, mainly – dressed in flowing shirt and trousers, both Egyptian cotton white, he cut a ghostly, pallid figure on stage, contrasting with the jet black of grand piano and guitar, with his almost skeletal frame barely impacting on the expanse of the stage and the vastness of the auditorium above. But the voice remained remarkably strong, perhaps not quite with the range of yore, but not lacking in volume or its fabled intensity.

He rattled through a setlist of 17 songs, almost without pausing for breath – there’s less of the slightly kooky banter these days between tracks, even whilst stopping to tune his guitar, and the audience respectively kept its counsel – solo gigs in the past were always punctuated by smartass interjections from the crowd, the fanbase being, like the artist himself, a fairly eclectic, intense lot.

I’d been emailed on the day by an old schoolfriend who attended the Glasgow gig a few days previously – he mentioned 6 highlight tunes (and one which was not). Incredibly, not a single one of these was performed in Manchester, testament to a vast repertoire to draw on, and an ability to recreate them. And there is some ‘re-creation’ going on here – whilst the lyrics remain secure, aided by assorted sheets of paper alongside piano and guitar, Hammill takes liberties with his piano accompaniments, often trying out a fill here or there, deciding whether it works, and then reining things back in if they start to stray off course. On the guitar, it almost appears at times as if he’s revisited old tunes, can’t quite work out the chords he used, and then uses an approximation. At times this is jarring, elsewhere it adds to a sense of innovation. For all that, he felt more fluent on the piano than I remember, and a saving grace was the wonderful sound quality throughout.

Starting with the VdGG classic ‘My Room’, ideal for solo performance, any doubts that Hammill still ‘has it’ were quickly dispelled. The trademark raising of the shoulders as he reaches for the high notes, the alternately sweet and growled delivery, the falling away of the voice at the end of each line – these are all things to cherish. The choice of songs for me was quite inspired – a brilliant ‘Primo On the Parapet’ (a highlight from later albums); two tracks from ‘Over’, for me the apogee of his solo output, with “(On Tuesdays She Used To Do) Yoga” an evocative highlight; two fantastic renditions from the adventurous early 70s albums “Slender Threads” and “Mousetrap”; plus stuff from ‘my’ era as a listener, “Too Many of My Yesterdays” and “A Way Out”, always a mixed blessing with its stark main musical theme sometimes undermined by lyrical cliché. Whilst listening to one of the 2 K Group era tracks, ‘Happy Hour’, again subverted by those slightly out of kilter chords, I was reminded of quite how off the wall even his solo material is – complex, ever-changing themes showing the genius of the man. This was one of many tunes which lyrically referred to performances, either theatrical, circus or musical – the common theme of the night for me.

There were also three tracks (I think) from the latest album ‘From the Trees’, which sounded strong, pared down in terms of vocal range to suit the limits of Hammill’s voice and well worth further exploration. At times whilst straining at the upper end of the musical scale I wanted him to succumb to delivering notes through his wonderful, tender falsetto voice or alternatively really let rip with a scream, but he saved the latter for the final notes of Train Time to bring the concert to a chilling end, standing ovation and all.

It speaks volumes of the man and his impact on music in Hebden Bridge that I heard Mick West (aka Michael Linden West) far before I ever saw him or got to know him. In the summer of 1999, having just moved to the Nutclough, I started to hear the most marvellous live music performed from an adjacent house’s cellar. Lengthy, spiky Balkan instrumentals, played at breakneck speed by a cast of many with audibly consummate musicianship – I never got to hear them play in the flesh, nor get their name, but it didn’t surprise me to find out later that they were one of the many outfits Mick was playing with. Mick must have been involved in scores of bands over the years but most of the onesI got to hear him with seemed to have slightly bonkers names: Beastfish, Abrasive Pheasants,  the Electric Brains – all suggesting punk sensibilities to go with his effortless command of a range of instruments and styles.

I got to know Mick at the weekly Open Mic Nights at the Stubbings in the mid-2000s , a glowering, moody presence (or at least that’s how he liked to portray himself), who combined an off-the-wall choice of songs with superb delivery and a wicked sense of humour. I discovered that in amongst his encyclopaedic musical interests we both had a compulsive obsession for all things to do with the Canterbury music scene, Gong and Van der Graaf Generator. So much so, that although we never exchanged many words at the time, on more than one occasion I’d be completely disarmed by a track he plucked out of nowhere to perform, which would have meant little to anyone present except me. On one occasion it was Daevid Allen’s ‘I Am A Freud’ (original here), a satire on psychiatry, transposed from its original fairground organ to Mick’s acoustic guitar and containing the memorable line ‘It’s rather naughty to be forty and still not sold’; the other Peter Hammill’s ‘Time For A Change’, (original here) where Mick’s falsetto acted out the role of a headmaster asking a little boy what he wanted to be when he ‘grew up’. I can still remember the shivers going down my spine.

Mick performed at mine and Georgina’s engagement do in 2006 – making light of a haphazardly arranged musical evening to croon away over a dodgy PA with his usual blend of soulful singing and crazed tunes, with his trademark cover of ‘Poisoning the Pigeons in the Park’ taking centrestage. Returning to the tapes of these earlier this week, I realised he’d also performed equally inappropriate material including the theme tune to Prisoner Cell Block H, plus another Tom Lehrer tune extolling the perils of marriage! They brought the house down… He later performed a duet (on violin) with old friend and collaborator Paul Weatherhead. In what seems now doubly poignant, another performer that night was Josh Phillips, a good friend of Mick (they recorded music together as the Tropes), who tragically died, also way too young, a couple of weeks later.

Lots of things make me smile when I think about Mick – Saz’s ‘glam’ party on the Nutclough in 2005 when half of the Hebden menfolk turned up in drag – I have an indelible memory of Mick fast asleep in a chair in the early hours, his ‘skirt’ ridden up around his knees. Or when he recounted the tale of confiding to a fellow Hebdenite about being worried that he displayed many of traits of Asperger’s syndrome, only to be approached the next week by a friend concerned that he’d been given an Asbo, the Hebden rumourmill having gone into overdrive. His self-appointed ‘office’ at Marcos cafe where he’d enjoy a morning (or afternoon) coffee. Or at the height of the Happy Slapping fad – when tagged by a few strangers in Hebden, Mick, being blissfully unaware of the meme, had taken it at face value and slapped back even harder! 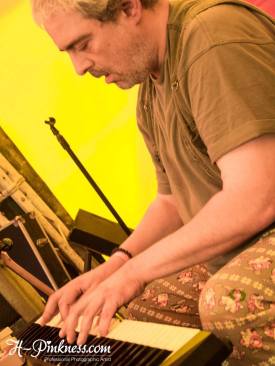 Mick was an understated musical genius – there will be many musical projects I simply didn’t hear about from his many years as a performer – I saw him mostly as keyboard player with the Electric Brains, performing in a variety of guises with the Ukrainians  (for whom he is credited with playing mandolin, guitar, piano, trumpet, duda, oud, cello and euphonium!) and heard more recently that he’d worked with Damo Suzuki from Can, and allegedly turned down a job as bassist with New Model Army. When I did finally did get to see him again it was with the wonderful Beastfish at Kozfest down in Devon, reviewed here. In fact he was due to play with them again over Easter in Glastonbury. He was so versatile and creative.

I didn’t get to know Mick as much as I’d have liked to – other people I know had that real privilege. There were always plans to swap more tapes, books, and go to gigs together that due to my own disorganisation didn’t materialise. But we’d chatted recently and were equally excited about him playing at Kozfest again this year. He had a clever, sardonic wit that showed not just in conversation or when performing but also in his postings on a variety of forums and social media outlets under a series of pseudonyms – showing a wry, generous, self-deprecating humour that was very much the antithesis of today’s keyboard warrior. As has been said elsewhere, you’d struggle to find anyone with a bad word to say about him. Mick, you will be missed in so many ways…