A few items of news have come in since this article was last posted back at the start of September.

A hotly anticipated memorial concert for Phil Miller will be held at London’s Vortex Jazz Club in Dalston,  on Sunday, January 6th, 2019. Many musicians familiar to readers of this blog are due to appear – news of acts and tickets will appear in the next few weeks at the excellent Phil Miller legacy site

Superb Canterbury band, now a four piece, release their 5th album ‘Brain’ on 30th November hopefully to be followed by a tour. One confirmed gig is in Bristol at Crofters Rights http://croftersrights.co.uk/ on 7 December.

You can pre-order their album here

Canterbury’s other current mercurial sons are apparently on a sabbatical, with a couple of members newly introduced to the joys of parenthood. However, I understand that Matthew Watkins, author of the unique history of Canterbury ‘You Are Here’ reviewed here, is curating a series of archive releases by the band (and there are some very fine cuts to choose from there)

Yamma, who I described as a ‘pop-up’ band in my review of Kozfest here have happily decided to continue their good work – the band, which includes singer/synthesiser player Cary Grace, Mike Howlett, Graham Clark and Zorch twiddler Basil Brooks have a gig at King Arthur’s in Glastonbury on 10 November

News since the first post of Richard Sinclair’s appearance on an album by the O.A.K band from Rome. Richard appears on an album described as a Progressive Rock Opera dedicated to the life of Italian philosopher and monk Giordano Bruno, who was burnt alive at the pyre as a heretic in Rome 418 years ago – other guests include Sonja Kristina of Curved Air, Dave Jackson of Van der Graaf Generator and the late Maartin Allcock of Jethro Tull/Fairport Convention.

Lots of links to get a fuller flavour of this:

http://www.oakgiordanobruno.eu (information on the album and the whole project)

https://www.youtube.com/watch?v=zfgvlt9alv4 (promo video of the project)

The album is available from the links above or via Amazon

‘The Other Place’, the latest album by Billie Bottle  (major collaborator with Dave Sinclair in recent years) is almost upon us – full details of the project here with a startling teaser called ‘Plebs’ described by a few online as ‘Slapp Happyesque’ available to listen to here

And finally, for the moment, news of a further gig by that living slice of Camembert, The Invisible Opera Company of Tibet, who play the Prince Albert in Brighton on 24 November.

News of autumn tours in the UK by Caravan and the Soft Machine, a rare Stewart/Gaskin gig plus the recording of a new Gong album got me musing about quite how much new stuff there is currently happening…

In the absence of any recognised forum for forthcoming gigs and albums (although the excellent Calyx Canterbury internet resource has a gig page here and the Gong Appreciation Society does also regularly update its gig page here , here’s an attempt to sum up what I know about (with a request to let me know what I may not know about).

…are already 5 dates into an extensive 50th anniversary tour (the anniversary being of the release of their first album, rather than the band’s inception, which was actually 2 years earlier) to promote their new album ‘Hidden Details’, which on a few initial listenings (review soon) sounds like a startlingly strong release. A number of dates during September in Germany, Italy, Austria, Holland, Slovakia and the Czech Republic are followed by 12 dates in the USA and Canada before launching a 10 date UK tour in November from Canterbury. Then back to the States in the New Year. There is an excellent new Soft Machine website at www.softmachine.org which includes a tour blog

… have their own 50th anniversary mini-tour of the UK in November (maybe more dates will be added), mainly in the south of England. In fact you have a unique choice to see Caravan and Soft Machine on consecutive nights if you’re willing to travel the length of the country, the most insane combination being the Soft Machine in Kinross on 8 November, followed by Caravan in Herne Bay on the 9th, a mere 504.9 miles! You could then pop back up north to see Kavus Torabi DJing in Halifax on the 10th (see below)

Caravan will continue their tour in the New Year, hopefully visiting Poland in January and Germany in May. Updated details on the official Caravan website at https://officialcaravan.co.uk/

Geoffrey Richardson is currently working on a new album for Cherry Red provisionally entitled Nethersole Farm’, Jan Schelhaas has a new album available via PledgeMusic entitled ‘Ghosts of Eden’ , and with the news that Pye Hastings has relocated back to Canterbury from Scotland, hopefully there is a real chance of collaborations with Geoffrey and the boys at some point in the future.

After a series of UK festival gigs this summer, following visits to Finland & China, are currently creating material for a new album, the second from the Kavus Torabi-led line up that produced the brilliant ‘Rejoice I’m Dead’! They are also touring Japan and Canada in the autumn, augmented by Steve Hillage (a hint of this was given when I saw them at Beatherder performing, sans Hillage, part of ‘Fish Rising’). These gigs are in October and November respectively – details at https://www.gongband.com/shows/

The new album will hopefully be released in 2019, and be followed by gigs. One date already confirmed is at the Madhatters Music festival in Devon next May

In the meantime, individual Gong members all have solo projects, which I am hoping to write a feature on in a future blog.

Kavus Torabi embarked on a series of solo gigs last spring to back his mini-EP Solar Divination, featuring, perhaps surprisingly a new direction partly performed on harmonium. He also continues to do DJ sets with Steve Davis with an extensive series of dates detailed here: Kavus has a number of excellent albums available with his own separate band Knifeworld.

Fabio Golfetti, having recently celebrated the 30th anniversary of the seminal Violeta de Outono debut album and its follow-up Em Toda Parte with a remastered release of both on Voiceprint, continues to create new material with both Violeta and his own Invisible Opera Company of Tibet. He also has a project with his son Gabriel called Lux Aeterna which has an album’s worth of often excellent material

Dave Sturt does the occasional gig with Gong violinist Graham Clark and has an excellent solo album ‘Dreams and Absurdities’ available here . He is also performing one gig (alongside Theo Travis) to celebrate Bill Nelson’s 70th birthday in Leeds on 1 December – details here:

Released his latest solo album, the crowd-funded ‘Out of Sinc’ earlier this year and maintains a website detailing forthcoming gigs, projects and his extensive back catalogue at  http://www.dave-sinclair.com/ 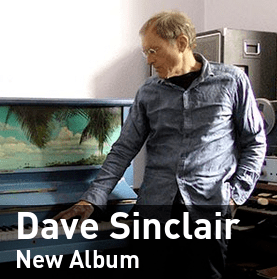 Richard Sinclair is actively gigging over in Italy where he now resides – word is that he is potentially producing new material which may be released next year under the project title ‘Kent’. Some Italian gigs are listed on the Calyx gigs page:

As mentioned, the duo performed an extremely rare UK gig in London on to launch the release of their latest CD ‘Star Clocks’. A couple of Japanese gigs follow in October 20th & 21st 2018 – full details of both here:

Ultramarine, who collaborated with Robert Wyatt (on ‘United Kingdoms’), Kevin Ayers (on ‘Hymn’) and assorted other luminaries such as Jimmy Hastings and Lol Coxhill, release their new album Signals Into Space on Les Disques du Crepuscule in November. After a lengthy hiatus, the duo have been recording again in the last few years, and this excellent sounding project breaks out of some of the minimalism of later projects to merge the ambient vibe of ‘Every Man’ with some of the jazzy feel of ‘Bel Air’. It also features ex-Bill Bruford’s Earthworks saxman Iain Ballamy. It’s amazing to think that it’s 25 years since ‘United Kingdoms’

who backed Kevin Ayers for a couple of heady years in the 90s, but who remain probably my favourite ever live band, are taking the chance to celebrate their own 30th anniversary in their native Liverpool. Much more to come, but their annual December bash in Liverpool is on December 14th with the promise of further gigs in the New Year. Tickets for this gig at the Zanzibar are here:

If you’ve never tuned into their madcap world, a good recent taster might be here https://vimeo.com/139203907

After premiering material from their forthcoming album at Kozfest (reviewed here) the band went into Big Jelly Studios in Ramsgate, and spent 3 days recording the 6 new tracks that will make up the new album mixed by guitarist Neil Sullivan and produced by Al Harle.  As with most of their other recordings it’s predominantly live with additional overdubs. Release date hopefully in December followed by gigs. There are also several videos in the pipeline (for a flavour see here)  including the release of an improvised session from a few months ago.

Kevin’s daughter Galen now lives in the US and has recently released an album called Monument. She has also been seen recently in duo gigs with Bridget St John (who did a couple of memorable duets with Kevin in the early Seventies, notably ‘The Oyster and the Flying Fish). She hopes to bring the duo to Europe next year, funding permitting.

Please let me know anything I’ve missed and I’ll do my best to update this post.