Between 1985 and 1989 I lived in Victoria Park/Longsight in Manchester, within half a mile of two major alternative gigging venues, the International and the International 2. Over those years I saw a number of my heroes, including Peter Hammill, Robert Fripp, Gong Maison, Here and Now, Ozric Tentacles and Loose Tubes, the amazing 20-strong young turk British jazz big band, three of were playing with Bill Bruford. In the very early days I was also lucky enough to see many local bands there for nowt thanks to an enlightened policy to allow up and coming bands to showcase there on a Monday night. A mile in the other direction was the University of Manchester Students’ Union which had 2 (later 3) venues and simultaneously at weekends put on a variety of gigs. I remember one particular season where a series of bands went out for £1.50 a go, including then indie-darlings The Primitives as well as the more grebo-oriented Pop will Eat Itself and Gaye Bykers on Acid, which did little for me but were as close to my own more psychedelic tastes as it appeared to get. My tastes were still narrow enough to be at many gigs mainly as a result of mates’ interests rather than my own (and that extended to many a good night at the Boardwalk, an embryonic indie venue just off Deansgate). The Band on the Wall, where I frequently went to sparsely attended jazz gigs on a Thursday night, usually bringing down the average age by 30 years, was much more my musical cup of tea.

Anyway, once more in the company of housemate Joe, I remember attending a ‘Christmas Ball’ at the University, no doubt in the company of a largely comatose beer-swilling audience, and being unexpectedly poleaxed by a Scottish band neither of us had previously heard of. Intermittently illuminated by a fierce strobe light show, this crew-cutted, polo-necked quartet, all monochromatically dressed (although I can’t remember whether it was in black or white) chugged out a buzz-sawed, reverb-heavy sound entirely i

n keeping with the bewildering light show behind them; the aural assault softened by the beautiful harmonies of the two lead men Derek Mackenzie and Colin Angus. This was The Shamen, playing material from ‘Drop’, and was finally the psychedelic music I’d been waiting to hear live. Joe was similarly blown away – around this time he had started or was thinking of starting his fanzine ‘Recoil’ with fellow housemate Gav.

The Shamen were filed away as people he wanted to interview, and whether by design or otherwise, the next time the Shamen came to town, they ended up staying en masse in our grungy 7-bed house (there was no living room), finding space on the floor around the drum kit at the end of Joe’s bed. By this time Derek had left the band, leaving brother Keith on drums, Pete Stephenson on keyboards and  Angus, with  Will Sinnott having joined on bass. The Shamen were also by this time starting to experiment with house rhythms through existing instrumentation, and through their regular visits to Manchester over the next few years, we got to experience their controversial video backdrops, their music which was slowly morphing into electronica, their altering consciousnesses, and changing line-ups as all original members bar Angus dropped off. I’d moved out by the time the band had started to get popular acclaim with ‘Move Any Mountain’ and later ‘Ebenezer Goode’ and looking back at the stuff which followed ‘Drop’, it sounds very much caught between two stools, but being in the thick of it at the time was so exciting. ‘Drop’, meanwhile, is a much more consistent album, classic psychedelic pop with two fine voices and some superb songs, amongst them ‘Strange Days Dream’, and the anti-Falklands war anthem ‘Happy Days’ – I return to it often.

Between 1990 and 1993 I worked full time at a free Manchester entertainments newspaper, Up Town, which was lucky enough to be in circulation right through the ‘Madchester’ phenomenon and was underpinned by dubious ethics in terms of in-house professionalism whilst providing an outlet for a whole army of volunteer writers and photographers. My job here wasn’t actually as a journalist, and in any case the music covered was more likely to be the Stone Roses (whose first ever interview appeared in the newspaper) and Happy Mondays but thanks to one particularly progressive editor, I managed to squeeze in interviews with Dagmar Krause, Peter Hammill, Courtney Pine … and the Wizards of Twiddly. The latter were a ubiquitous presence in Manchester and Liverpool at the time, their daft name and gaudy graffiti-like posters arousing mine and others cu

riosity, accentuated by the appearance of a demo cassette ‘Kitchen Sounds’ at the Up Town office. And that was all it took to be totally sold on the band – ‘Independent Legs’, followed (I still have the T-shirt – in fact I wore it whilst cycling the length of the country a few years back) and I saw them all over the show for the next 10 years – PJ Bells in Manchester was a regular haunt (although I have no recollection of the gig interrupted by the Fire Service described here), The Witchwood in Ashton, St Helen’s Citadel, Glastonbury, Sefton Park, then later a triumphant tour and series of gigs with Kevin Ayers where they did an hour of their own unfathomable material before backing Kevin for an hour of his. As for their music, well it was once described as “jazzy TV themes gone haywire, loon tunes about vegetables, yobboik punk numbers, outrageous guitar heroics and the most blissful sixties-drenched pop.” and I couldn’t have put it better myself… My favourite ever live band. 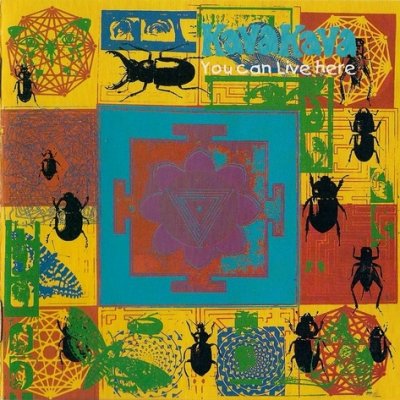 Having shown a bit of interest in the Wizards and raved about them also in Facelift, I became unwittingly (and welcomingly) a repository for similarly off-the-wall music – I somehow got on the mailing list for the wonderful psychedelic label Delerium (which introduced me to the music of Porcupine Tree, Dead Flowers and Electric Orange), but also received cassettes from the likes of the Great Imperial Yoyo (‘Blink’ is a Camembert Electriquesque masterpiece), psychedelic dance pioneers Time Shard … and Kava Kava. I can’t remember the name of Kava Kava’s first cassette and no amount of Google searching will locate it. I did have a later CD version of it which was inside a car which got stolen a couple of years back (and I’m particularly gutted about that). All I can tell you is that it was unpronounceable and was subtitled ‘The Cosmic Wobble’ which is why there is a picture of their even more startling ‘You Can Live Here’ album here. In fact their last full album ‘Maui’ is probably their masterpiece. The band were a fearsome blend of initially messy guitar, hyperactive drumming, Pat Fulgoni’s unsurpassable blues voice (he later became a go to guy for drum and bass vocal samples), and killer funk rhythms which gradually got tighter as the band evolved. Quite why ‘Maui’ wasn’t an intergalactic success I’ll never know. I frequently scan gig listings (as I do with the Wizards) just in case they decide to reform – if they do I’ll be there..

For 5 years in the early Nineties I lived in another house share in Chorlton, Manchester with some of the same crew who’d lived in the bombsite we’d hosted the Shamen at towards the end of the 80s. Facelift was going from strength to strength, as was Recoil, and disparate sounds continued to permeate between the various rooms in the house. One such which grabbed me was that of ‘The Guitar and Other Machines’, introducing me to the work of the Durutti Column. The Duruttis (ostensibly a duo of guitarist Vini Reilly and drummer Bruce Mitchell) were the unlikely darlings of Factory head honcho Tony Wilson, unlikely in that they were so completely out of kilter with all other Factory acts, or indeed the entire Manchester music scene. Whilst Reilly’s gaunt appearance and well-publicised drawling, tuneless vocals might have have had some common ground with it, the music emanating from his guitar (and keyboards) was (and remained) something of such breathtaking beauty that every subsequent album became a ‘must buy’ whilst the prior catalogue was tracked down in haste. Reilly’s gift is as the purveyor of soaring, semi-classical works of religious intensity – ‘The Guitar’ is listed here because it’s the first album I came across, and like all other albums is a mixture of inspiration and flaws, but it is rather good, with the duo of tracks: ‘Bordeaux Sequence’ and ‘English Landscape Tradition’ amongst the most well-spent 10 minutes you’ll ever experience. I’ve been lucky to witness the Durutti Column in a selection of memorable Manchester locations: the Royal Exchange Theatre, Manchester Cathedral, and even in the splendid Whitworth Hall with the rays of sunset pouring gloriously into the venue, exorcising memories of some disastrous final year university exams in the same room a few years previously!

From a different time, genre and source comes Fred Frith’s ‘Gravity’. At Facelift in the early 90s I was being sent not only lots of old newspaper cliippings which ended up as the Facelift ‘archive’, and tapes and CDs to review, but also, courtesy of like-minded and altruistic readers, various bits of music to intended to further my own musical education. If you follow the path through my own musical tastes, I had graduated from heavy metal to progressive rock, to experimental music, to jazz crossover – always wanting to go a stage further. I’d sort of reached a dead end with freely improvised jazz, whilst taking the step from Soft Machine to Henry Cow didn’t completely grab me. But somewhere in the middle was the tape sent to me of ‘Gravity’. Fred Frith’s unique guitar style, matched to some semblance of accessibility was embellished by a nod to European folk traditions, whether faux or otherwise. ‘Gravity’ is a standout masterpiece of extended instrumentation with a perverse twist on folk sounds, backed by a whole host of Rock in Opposition musicians including the Muffins and Samla Mammas Manna. The album opened my ears enough to check out a whole genre of RIO work, not least Frith’s involvement with the superb Art Bears trio (with fellow Cow-ers Dagmar and Chris Cutler), and the utterly bonkers Skeleton Crew with Tom Cora playing wonderful grating cello alongside a host of homemade instruments. This education continued with the likes of Nimal, Curlew, Samla, and more recently Iva  Bittova, which I’m sure was entirely the intention of the enlightened soul who sent me the cassette, whose identity I have unfortunately forgotten!