Whilst not a name that would be immediately recognisable to the majority of people regularly reading this blog, the piece about Mick West’s tragically early death around a year ago was read by more people than any other post in 2018. And so it seems appropriate to talk about the memorial gig held for him last night at Hebden Bridge Trades Club.

Mick was a somewhat larger than life figure, and a wonderfully talented multi-instrumentalist and songwriter much loved by many in his home town of Hebden Bridge and whose music permeated into the lives of many locally and beyond. This evening of fine music packed out a midweek venue, testament to the memory of a highly respected musician. 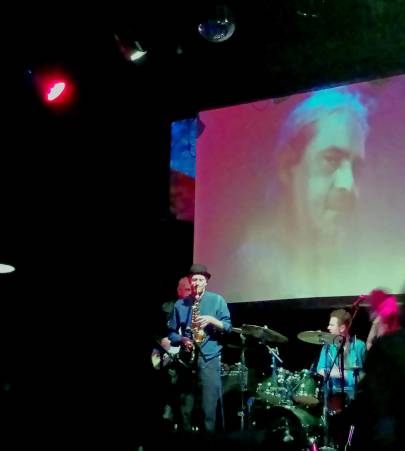 Simultaneously broadcast live on Recycle Radio http://recycleradio.co.uk/ (with running commentary from DJ Creedy), the evening consisted of performances from 5 of the many bands Mick had long associations with, and as is often the way of these things, with many musicians appearing more than once. Whilst the performances were not strictly chronological in terms of the origins of the music, things did started off logically enough with the  appearance of Amoeba Pie, originally a duo with Paul Weatherhead, long term collaborationist.  I associate both him and Mick with a somewhat daft, acid-tinged view of the world both lyrically and musically, and this collection of songs, performed by Paul on guitar alongside Steve on bass resurrected a set of Mick’s songs dating back as far as material penned as a 16 year old: a real mix of dope tales, clever plays on words and father/son confrontations, with some folky twists. Some real gems in there.

Abrasive Pheasants came next, a band I never got to see live even though Mick extolled their virtues to me frequently when I saw him latterly. Creedy promised us ‘free jazz improv’, but that does a disservice to a band who laid down some fairly tight funky grooves with some excellent busy drumming to allow some superb lyrical sax to shine through. The only real free departure was in a rather bizarre spoken word piece from bass player Mention also here for Colin Robinson (he of Jumble Hole Clough and frequent Mick collaborator) joining the band on guitar. A very fine band I’ll want to see again.

I first saw Beastfish at Kozfest 2017, with Mick on keyboards, and given the circumstances couldn’t bring myself to see them again there in 2018 after Mick’s death. But I’d forgotten quite how stunning they were, even shorn of Mick’s subtle accompaniments. Ostensibly a vehicle for the poetry (both spoken and sung) of Ste, delivered in an urgent, compelling narrative, this band is much much more besides, with tightly arranged music featuring a astonishing performance from guitarist Slim Verhoef, managing to provide both the sonic backdrop and main riffs without breaking breath, whilst Woody on drums and Mike on bass provide slick rhythms. Superb stuff.

A combination of babysitting arrangements, an early start for work next day and the emotion of the evening (the backdrop to all performances was a large screen showing montages and videos of Mick in various stages of his musicial career, and was hugely evocative), meant that we left the Trades before the final two bands: probably the ones Mick is most associated with – the Electric Brains and the Ukranians. Lots of familiar faces and tunes within their ranks without doubt. I’m sure they did him proud.

Look out for the broadcast of this event to pop up here: http://recycleradio.co.uk/