Without doubt currently Canterbury’s most innovative and questioning band, Lapis Lazuli have just released their sixth album, this one a double CD of improvisations, the first capturing their recent performance with ex Can vocalist Damo Suzuki in nearby Ramsgate last September, the latter a series of 8 individual pieces recorded in the studio. The band’s drummer and founder member Adam Brodigan took time to answer a few questions in our latest interview feature.

The first time I saw Lapis Lazuli was at the ‘Canterbury Sound’ Day in 2017 when assorted academics, musicians and writers assembled to not only speak about the genre that we all know and love but to listen to an excellent programme of music including Soup Songs, Jack Hues and the aforementioned Lapis Lazuli. At one point during their blindingly manicured set, the luminary standing next to me, who really should have known better, asked me whether I thought the music was improvised, something of a travesty considering we were listening to two tracks from ‘Wrong Meeting’, possibly the most densely crafted music since the composed work of Henry Cow. Their masterpiece ‘Brain’, released at the end of 2018 was even more meticulously and adventurously structured.

The irony of course is that since that Canterbury gig Lapis Lazuli have started to regularly perform improvised pieces, both live and in the studio. Having heard some of their early excursions (released as a bonus side on the vinyl version of ‘Wrong Meeting’) it would appear that the band have been simultaneously dabbling in improv for quite a while, although ‘Hi Jazz’, as it was collectively known, is probably best described as some initial thoughts from which some of their structured ideas have emanated from. However, the appearance of the extraordinary video ‘Shall We’ rather took this further, a precisely timed 30 minute romp from around the time ‘Brain’ was recorded. Whilst much of this is frankly a row, there are genuine moments of inspiration and coherence and it captures the band’s exuberance as fantastically as hearing them perform any of their 5 studio albums to date.

The bonus material from ‘Brain’ (available as a free digital download if you purchased a vinyl copy of the album) continued the experimentation: whilst some of the tracks are clearly pre-prepared, such as the mellow version of ‘Low Key’, and the magnificent ballad ‘The Slowening’, others are not, and again, this was a blend of the inspired and the exploratory.

Which takes us to the band’s sixth release – the Damo Suzuki recording is a single stream-of-consciousness performance lasting over an hour, which slowly develops from its initial warped churchy, distended feel into a series of slow grooves and funk licks, embellished by Suzuki’s various vocal techniques: spoken word, a fulsome growl here and there, and even some bluesy crooning. I’m aware that Suzuki’s tours often involve him appropriating pick-up bands en route (my good friend, the late Mick West, was in one such when Suzuki played in Hebden Bridge a few years back) but hadn’t realized the process was quite so ad hoc. Adam Brodigan takes up the story “We had quite literally not met Damo, played with him, talked on the phone or anything until about 6pm the night of the gig!”

But the gig at Ramsgate Music Hall, from which the recording was taken, was far from an accident: “We had got our spot supporting Gong at RMH (in July 2017) because their sax player Ian East had started coming to the Crash Of Moons Club nights I was putting on, at the time in Bramleys, Canterbury. When he told me Gong were booked there, I convinced him to put Lapis as support. That was our way into the venue. After that, Andre and Al (from the venue) were both very impressed and happy with the band, so much that they then booked us for the Acid Mothers Temple support (later that year), and we then went and recorded our album ‘Brain’ with Al at his studio. We were therefore RMH’s first choice for Suzuki’s ‘Sound Carriers’ once they had secured him for the Kent leg of his tour.”

So how does a gig with such an unknown quantity work? “We were told to simply follow his lead, as he probably wouldn’t look round to us, and he’d just do his own thing. It was all spontaneous, the only thing we worked out was who went on stage first, based on choosing numbers, which was his idea”

Suzuki’s vocals are slightly distant, echoed and somewhat spookily appears as almost a commentary on the music or the prevailing atmosphere – a work colleague of mine described a Suzuki gig he’d attended in London as something of a shoutfest, but this is far from the case here. The words themselves might be indecipherable but there is subtlety and coherency as the band adjust to the vocal overlay, or him to the music manifesting around him.

The second CD is a somewhat different beast, shorn of vocals and with many more of the trademarks of the ‘core’ band. ‘Louis Padilla’s Muzik Uzi’ (a cursory examination will reveal this is an anagram of the names of the performers of collaborators from Disc 1) does also contain pieces which are clearly off the cuff performances, and for me the tracks at the more aggressive end of the spectrum (such as the brief riff ‘Free Haircut’) perhaps fare less well, serving as microcosms of some of the more dissonant workouts on previous improvs. ‘James Black’, a jarring funky workout is symptomatic of this – tremendous sparring but never quite finding that knockout blow. But ‘Tribe of Tribes’ gives a lovely hint of what is to come throughout the better half of this album with its mellow bouncy bass theme, whilst drums chatter and guitars noodle. And the last four tracks, sharing 35 minutes between them, are universally excellent. ‘Abrubtion’ continues the bass groove backed by ever more frenetic drumming, ‘Cheap Minor’ starts off slowly but etches out a haunting guitar theme. Best of the lot are the last two pieces: ‘Untraceable Customs’, a superb track opening out from its sirenic guitar to slither into a hypnotic drum and bass rhythm, mellow yet propelling, reminded me of Hugh Hopper’s ‘Hughscore’  in its underlying vibe, topped off by the best guitar interplay on the album. And last up is ‘Sea’s Harp Apocoly’, with its atmospheric midi’d sounds, crafted guitar lines and unmistakeable funked up bass – this could almost be an outtake from the more laid back parts of ‘Hired Soul’ or ‘Falling Line‘ from ‘Brain’. What’s interesting to these ears is that a band so well defined on their composed pieces by Adam Brodigan’s constantly shifting time signatures and Luke Mennis’ dexterous bass playing so easily shifts into extended groove mode in these improvs, providing the space up top for the dual guitar approaches. And ‘Sea’s Harp’ is symptomatic of many tracks on the album that appear so well-formed that it’s difficult to fully accept that these ideas could be straight out of the box.

This is the first recorded excursion for Martin Emmons who has replaced Dan Lander on rhythm guitar – quite how his interplay with Sullivan will match the sublime intertwining the latter achieved with Lander will probably have to wait until the next composed release: these recordings normally take the form of one guitarist providing the soundscapes, whilst the other etches out a motif.  Of the latest personnel change, Adam was at pains to point out that this was symptomatic of the band being more of an open door than a revolving one:  “The band started life as a four piece, the guitarist of which was a big Hendrix and Ben Harper fan, (and) had a solid, smooth sound. He left and was replaced by Dan, who had a far more aggressive, angular approach, as we expanded to a six piece. We also changed bass players – Luke is the fourth we’ve had! Boiling down to a five piece for ‘Wrong Meeting’ made us lose quite a lot of the palette of sounds we had enjoyed previously, and again losing the sax reduced dramatically the ‘vintage’ and jazzier sound we had adopted.” These earlier line-ups are captured on Youtube performances and often include accordion, trumpet, extra percussion and a much more catholic set of styles. Adam continues, “changing guitarists for the third time has indeed brought a new sound, and as we prepare to write new material it is very clear Martin will take the band elsewhere.”

“Lapis has always been very flowing – no restrictions have ever been imposed within the group on how to tackle composition. It becomes very natural therefore to hear the metamorphosis of the band’s sound as you go from the 2012 material to the latest stuff. ‘Brain’ became grittier and heavier due to the dominance of guitars and Luke’s particular love of ‘spicy’ chords and cross rhythms.”

And as to the band’s burgeoning relationship with improvised music, “our first fully fledged live improvised set came about when Sam Bailey booked us for one of his avant-garde Free Range nights in Canterbury. After this, we played a Crash Of Moons improv set, and a secret warm-up gig for the Damo show, again purely improv. Our recent album launch show was a mix of pure improv, jams of the grooves from ‘Louis Padilla’s Muzak Uzi’, the 20 minute ‘Reich’ (from ‘Wrong Meeting’) and a tune from ‘Brain’. We have only just taught Martin ‘Reich’, and we plan on getting him to grips with ‘School’ from the same album too, so that we have plenty to go between at shows whilst heading toward new compositions.” What was evident from the gig I saw in Canterbury last June (for me one of the musical highlights of the last decade), where Martin made his debut and the band performed ‘Low Key’, ‘And Stay Out’ and ‘The Slug’, all from ‘Brain’, is that the new guitarist barely dropped a note in the performances of these fiendish pieces. 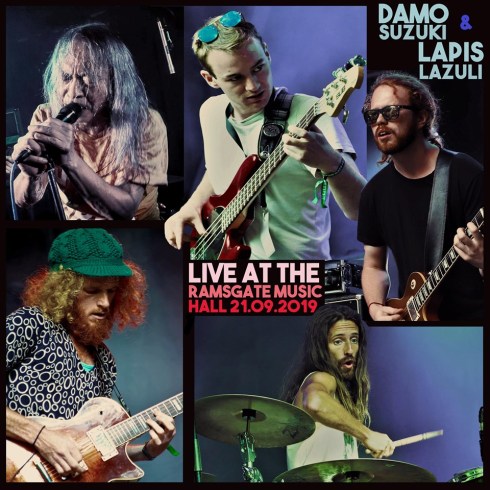 I put it to Adam that it must grind one down putting so much obvious effort into an existence which is so criminally underrecognised. “It is a labour of love- we keep the small amount of cash made in a pot for band spending, so have to keep our dayjobs and make sure our lives can cope with the band! It has meant avoiding some of the traps in life that would otherwise make this sort of thing impossible.

“Playing shows where people commend your work passionately helps very much. We do not have a massive reach, and are in no way a ‘big’ band, yet some people show such amazement at our shows that it makes the thing even more worthwhile, mixed with the simple pleasure of trying to get from the very beginning to the very end of one song!”

As I write, the band are just about to head off to France for a 4 date tour “we try to do that every couple of years at least” , and there are further compositions in mind. “There are ideas the other members of the band have been putting forward to work on as new material, which we will start looking at very soon. As for festies, we seem only to have Sonic Rock Solstice and Smugglers Festival this year, – we do hope for a few more though! ”

Watch this space… Thanks to Adam for agreeing to answer a few questions.

Previews and ordering of all the Lapis Lazuli discography here: https://lapislazuli.bandcamp.com/ 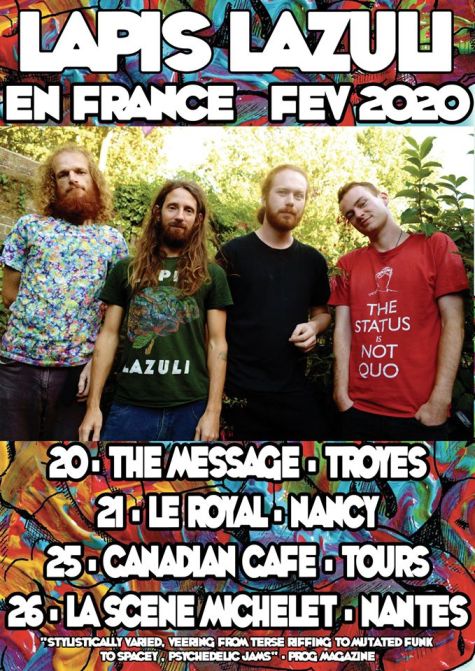