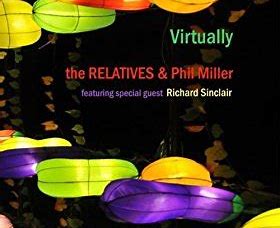 Somewhat belatedly, this review relates to an album from 2013 by a band called the Relatives. This release is of particular note because it is the last recorded output of Phil Miller who joined the band in 2010, did a series of gigs with them, and was invited to collaborate on a series of recordings which saw the light of day in 2013 as Virtually (presumably so monikered because Miller’s contributions were recorded up in London).

In fact there are other Canterbury connections here and one particularly notable surprise. You might already be familiar with the latter if you’ve heard ‘On My Mind’ through its Youtube airing, which has been linked through various Facebook groups. It features Richard Sinclair on vocals – but more on this later. Probably more notable overall is the involvement of Jack Monck, bassist with Delivery, and collaborator over the years with the likes of Geoff Leigh and Fred Frith and briefly, with Syd Barrett’s last live outfit, the ill-fated Stars. Monck shares songwriting credits with saxophonist, flautist and piano player Marc Hadley, who many of you will remember as the man penning the authoritative review of Aymeric Leroy’s ‘L’ecole de Canterbury’ on this blog a couple of months back, and also Willemjan Droog, the keyboard player who provides the original link with Phil Miller from the late Eighties. Damian Rodd completes the line-up on drums, although there are numerous other guest appearances throughout the project.

For me this is very much an album of two halves. Whilst uniformly excellent in terms of its playing standards and production throughout, much of the first part of the record stays on relatively safe ground, with a series of original jazzy or rhythm and blues tunes, the best of which is undoubtedly  the catchy  opener ‘Going Down’, where Monck takes the lead vocal as he does on 4 of the 8 tunes. Also notable is the sole track by Droog, the self-explanatory ‘Stately Waltz’ and ‘When’, which, with its multiple horn lines, at times evokes how an In Cahoots band may have sounded like with vocals!

But there’s a perceptible shift in mood and tempo as the band launch into track 5,  ‘Spaghetti’, a superb instrumental written by Marc Hadley. Here he shifts to flute and is central to a piece which meanders through its intricate melodies before stretching out memorably into harder passages underpinning the solos. There are elements of Short Wave here (it also reminded me of National Health’s DS Al Coda recording). Whilst Phil Miller is credited on guitar throughout the album, much of his work up until this point has been to add textures or chords to the general ambience. Here he steps up a gear to contribute several solos, starting initially in tranquillity before reverting in hotly anticipated style to his trademark tortured eloquence twice over.

Even better is ‘New Dawn’, a funked up Monck track where the author’s voice is dampened down to deliver a fine vocal line. This grooves like no other piece on ‘Virtually’, with some memorable punctuation from Hadley’s sax and Mike Brown’s trombone and highly effective snapped-off drumming from Rodd. There are some nice guitar and keyboard licks here too. The evocative lyrical imagery (‘New Dawn’ has a somewhat Orwellian feel) adds to the drive and slight disquiet of the music. This one is worth the album’s cover price alone.

In contrasting style is the final piece of the release, the aforementioned ‘On My Mind’, essentially a vehicle written for Richard Sinclair by Marc Hadley, but containing much more besides. This ballad could almost be seen as a follow-up to Pip Pyle’s wonderful ‘Seven Sisters’, another custom-built song which also suited Sinclair’s very  deliberately-delivered crooning. Unusually, Sinclair’s voice is backed here in part by vocal counter melodies in its later sections, and the voice of Angeline Morrison  is a real bonus. Add to that the lovely piano accompaniment AND the most eloquent tenor sax by Hadley and this constitutes a treat which rounds off the album in slightly unexpected style.

So, plenty to savour here. This album is probably catholic enough in approach to not suit everyone’s tastes all of the time but has more than enough fine moments and appearances by key personnel to make it an essential part of your Canterbury collection.

‘Virtually’ is available direct from Jack Monck at jack.monck@hotmail.com at a cost of £10. You can also buy from www.relativesrecords.com or Burning Shed.

One thought on “The Relatives & Phil Miller – Virtually”