In the early days of producing my fanzine Facelift in 1989 I made the cardinal error of publishing something which suggested Henry Cow might be part of the Canterbury scene. I probably wasn’t even aware of doing this until a letter arrived from their drummer Chris Cutler which politely but firmly admonished me for such a suggestion, before offering support for the ‘zine and putting me on the mailing list for his Recommended Records label and distribution network. Ultimately this opened up a whole new musical world for me: Skeleton Crew, Fred Frith’s ‘Step Across the Border’ and ‘Gravity’, The Art Bears and The Work, much of which was more accessible than the Henry Cow I already knew, whose music was and remains something of a mixed blessing to me.

Henry Cow may indeed not be part of the Canterbury scene but what is indisputable is that the paths of musicians from both genres intertwine inevitably, be it from the days of the Ottowa Music Company ensembles in 1971-2 which involved Dave Stewart; to John Greaves’ involvement in National Health (alongside Georgie Born) and Soft Heap; to Hugh Hopper’s work with Lindsay Cooper; Geoff Leigh’s connections with Phil Miller; plus of course the fact that Robert Wyatt unforgettably co-fronted Henry Cow for a heady few concerts in 1975. Facelift published interviews with Dagmar Krause and Peter Blegvad but also gave column inches to Jakko’s involvement with the Lodge (alongside Blegvad and Greaves), Lindsay Cooper’s ‘Oh Moscow’ and much much more. And so this is why this remarkable 500 page tome from Benjamin Piekut can be viewed as an almost a parallel narrative to that of the Canterbury scene and you don’t have to be a Henry Cow expert (I am not) to fully appreciate the story.

This biography is many things but its main strength is as a chronicle of the band’s extraordinary history which spanned barely a decade, meticulously researched from a vast array of sources, not just from the music papers of the times but via interviews with the musicians, plus access to private musicians’ notes, diaries and minutes from the band’s many documented meetings. This, alongside the fact that a significant number of Henry Cow members and associates were at the book’s launch in London suggests that this is a history with involvement of differing degrees from various members of the band, and it would appear that few stones have been left unturned in attempting to produce a definitive biography.

Secondly it’s almost a sociological study of a band who very much set out to be different not just musically but also politically – their creation of difficult, questioning music was not just a function of the considerable musical talents of several significant intellects (the band initially emerged from the university of Cambridge), but of a desire to function as a band somewhat differently from the norm.

I was aware that Henry Cow were keen on documenting their own history, often in situ, but having read little of this other than what came my way as archive clippings from the 1970s music media I learnt a lot which surprised me (but maybe not others) – such as the functioning of a band as a collective with its own payroll incorporating a small army of assistants as equal members (roadies, technicians, administrators). Frequent allusion is made to group meetings which decided every facet of the band’s existence, both musicially, ideologically and logistically. Piekut makes much of the term ‘contraviviality’ – his argument is that the tensions within the group, as well as their constant struggle to survive economically contributed to the efficacy of the music and in some cases may even been embraced as an essential part of the band’s existence.

‘The World is a Problem’ also, perhaps unwittingly, contains the best description I have yet seen of the machinations of the embryonic Virgin empire – the context being how Henry Cow benefitted from the setting up of a label which had a surprise success with ‘Tubular Bells’, which for a while at least helped legitimize the support for non-commercial outfits such as Kevin Coyne, Gong, Hatfield and the North as well as Henry Cow.   That said, Richard Branson, as is well chronicled elsewhere, had little personal interest in either the Cows’ or other roster bands’ music and ultimately Henry Cow began to regard Virgin Records as part of the ‘problem’. There are also interesting passages covering crossovers with Virgin label mates Faust, and much later Mike Westbrook’s ‘Orckhestra’, plus the development of ideas which would eventually culminate in the Rock in Opposition movement involving European likeminds, plus Chris Cutler’s ‘Recommended’ mail order and record label outlets. This is an intensely serious book about what would appear to an intensely serious band, but the mood is occasionally lightened through descriptions of the band’s early Dadaist theatricals, such as a performance where the band staged an argument on stage, then split into splinter groups who performed separately from that point onwards. 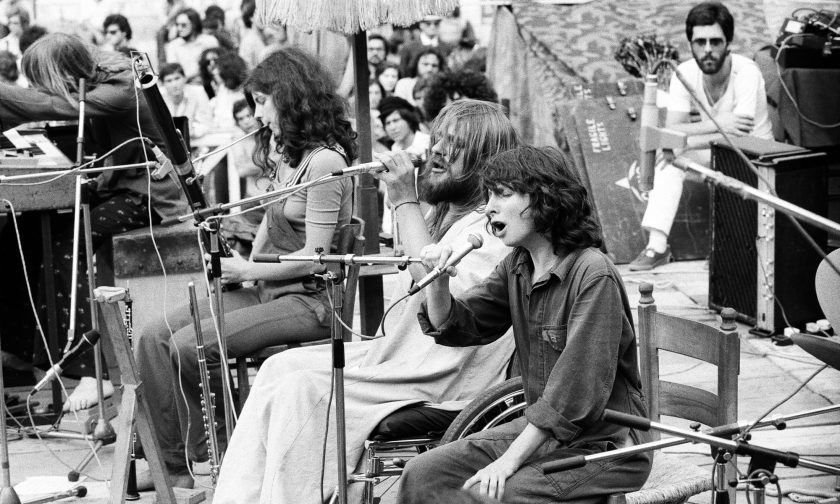 There are heavy going chapters debating exactly the nature of Henry Cow’s improvisational elements, their ongoing ideological ideas and how they fitted into a bewildering spectrum of politically far left experimental musicians, particularly their involvement in Rock for Socialism in 1977. To the casual cynical observer it might appear that Henry Cow created the perfect alchemy to ensure their indisputably marginal audience: extreme music (either intricately composed or uncompromisingly improvised) fringe politics and an alienating intellectualism which is alluded to often within the book (by members of the band) as ‘pompous’. But heartwarmingly this briefly struck a chord in Italy, where the band played to probably their most appreciative audiences, at politically-motivated events where there was the additional novelty of entering a world with little tradition of rock gigs. Elsewhere there is an entertaining discourse about how the band felt about punk, an intellectual analysis which would probably have baffled most of its proponents, and there is a particularly gem unearthed in that Fred Frith was once considered as a producer for the Sex Pistols. 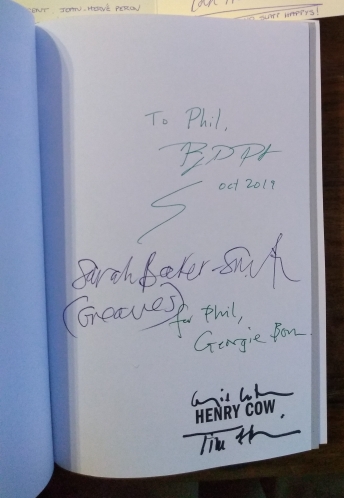 There are also detailed descriptions (and transcriptions) of particular musical pieces that thread their way through explanations of various time signatures – perhaps somewhat unnecessary given the fact that for the small number of people for whom this is essential information may well have already worked it out for themselves. Even if this is in fact necessary to paint the full picture of what the Cow was actually all about, then these extended examinations are of course much less interesting to this reader than the ‘personal’ stuff – the musical tensions that led to particular members leaving the band at various points; Dagmar’s ongoing battles with both health and the practicalities of taking her young son on tour; the various couplings between wider group members; the assimilation then rejection of the Slapp Happy band of Peter Blegvad, Anthony Moore (Dagmar of course remained and became the band’s focal point); the tensions in the core inner circle of Hodgkinson, Cutler and Frith and how it came to be balanced gender-wise by strong feminist personalities in Lindsay Cooper and Georgie Born. And finally, the changing in dynamics within the band over the recording of what eventually became  the album ‘Hopes and Fears’ (credited to the Art Bears)  and its role in the group’s subsequent disbandment.

Piekut is careful not to deviate much from a script that looks at the activities of the Henry Cow musicians purely from within their lifespan of Henry Cow alone – Geoff Leigh and John Greaves for example, drop off the radar pretty much the moment they leave the band. In that regard, for the Canterbury scene student that is perhaps a little frustrating given subsequent collaborations with musicians we all know and love, but an alternative covering the entire Cow legacy, given that this is already a substantial book, would have entailed a monster. One other criticism might be that whilst Piekut often navigates carefully through the musical scores, and has a clear picture of the personal qualities of the indivduals in the band: Tim Hodgkinson’s intellectual vision; Cutler’s work ethic and charisma; Greaves’ sense of fun; Dagmar’s physical fragility, there is barely a mention of each members’ musical ‘voice’. This for me would always be the starting point: Fred Firth’s dissonant multi-instrumental virtuosity; Chris Cutler’s butterfly drum patterns, John Greaves’ warm human bassplaying, Dagmar’s extraordinary mastery of everything vocal from the serene to the guttural and so on. Perhaps too, within the 100 or so pages of references, bibliography and indeces space could have been found for a timeline which in particular would have enabled the reader to keep pace with the various personnel changes within the wider Cow collective.

These, however, are minor criticisms – this remains a remarkable project: compelling, unique and requiring considerable powers of concentration and assiduousness – somewhat like the band themselves.