I’m currently on a package holiday in Greece – not entirely my style but after a dodgy year health-wise any plans to do something more adventurous hit the buffers a while back.  At a bit of a loose end last night, and not wishing to jump into another holiday book, imbibe some more Fix Hellenic lager or contemplate another night on a mattress on the floor next to the fridge, I let my mind drift off into half forgotten Canterbury territory.

The train of thought had been going like this – I’d been listening to Violeta de Outono (Gong guitarist Fabio Golfetti’s long standing Brazilian band) and in amongst the bonus track from their 1987 debut album was a version of the Beatles’ ‘Tomorrow Never Knows’ – actually probably less ‘psychedelic’ than the original, but blessed with a fine line in glissando guitar I can guarantee was never originally contemplated by John, Paul et al.

A bit of idle research reveals that it’s bang on 50 years since that track was originally recorded, also 50 years since the Soft machine got going. As I turn 50 myself this year I’ve been musing more than is necessary about ages and their significance.

When I came across ‘Canterbury’ music in the mid 80s for the first time it’s fair to say that I thought I was looking at it entirely retrospectively – due to age I’d missed its first wave completely and many of its artists seemed to have disappeared from view. I was able to plunder the musical archives from a distance with none of the ongoing frisson of being exposed to new ideas which comes from seeing the development of a band like say, Syd Arthur, as they metamorphose from album to album. It was a distant, impersonal study of a band or bands from afar. 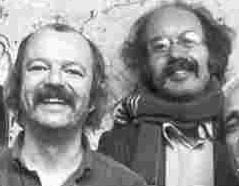 In 1987 at the Band on the Wall in Manchester I saw some of these ‘distant’ musicians become flesh for the first time.  I remember being staggered by the listing of a band led by Hatfields/National Health guitarist Phil Miller called In Cahoots, and containing (for me) luminary names such as ex-Softs Hugh Hopper and Elton Dean, and Gong drummer Pip Pyle. A band and experience that did not disappoint in any way.

What I was musing on last night was that 3 of these musicians are now long lost to us, all 3 of whom I had the opportunity to communicate with in one way or another over the next 10 years or so.  Hugh Hopper was a total inspiration for my magazine Facelift, the  first to lend his support with so many links and encouraging words, Pip was a friendly face at so many gigs and a wry commentator on so many subjects, Elton a more distant correspondent via letter. And yet the counterpoint to being able to plunder your heroes’ back catalogue in  retrospect is that those same heroes’ fortunes wax and wane so much earlier than your own – all 3 died tragically early in their sixties, and the death of the seemIngly ageless Daevid Allen in 2015 was in some ways an even starker hammer blow – I can’t claim to have had any personal relationship with him and he reached a much grander age, but he seemed so impregnable, such a constant musical backdrop to my life from 1985 onwards in so manŷ different guises – I could selfishly pick and choose when to see him live through the Nineties,  and still rack up in excess of 40 viewings over the years. I still can’t quite believe that I’ll never hear him tap out the guitar intro to ‘You Can’t Kill Me’ again or pulverise the riff to ‘Dynamite’ and it’s one of the reasons why for all the joy of seeing a Gong renewed at Kozfest with Torabi, Golfetti and crew  that the new material was so essential, the old coming at an emotional cost.

These thoughts were still with me this morning when I visited the Planet Gong website, ostensibly to see if the promised Gong Autumn tour dates had popped up. And immediately I saw the news about the death of Gilli Smyth.