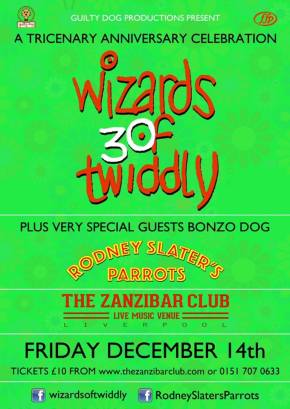 It’s an unexpected pleasure to be blogging about the Wizards of Twiddly in 2018. In the early Nineties they were, bar none, my favourite gigging band as they purveyed their own particularly brand of punky, jazzed up lunacy around various small-time hip joints in the cities of the North, as well as arts venues in the satellite towns in between. Generational contemporaries to myself, they struck a particular chord in appropriating influences from seemingly everywhere whilst the mainstream music press stuck to its own turgid agenda. They had a noisy brass section, a guitarist who rivalled Allan Holdsworth in ridiculous virtuosity, and three part harmony vocals, but most of all they had an anarchic, theatrical vibe which meant that they threw so much at you in their own slices of 3 minute heroics that you scarcely had time to draw breath. I was already writing about them in Facelift (as an indulgence chiefly  to myself) when the news came through that they were the new backing band for Kevin Ayers in 1994. I interviewed them for the second time here and also reviewed their Radio 1 Mark Radcliffe session here as they embarked on a series of double headers with Kevin. Their star flickered brightly for a few more years, still tragically under-recognised, before band members moved on to other projects. In intervening years, the December reunion gig in Liverpool has become a bit of an annual tradition, there have been archive albums of unreleased material (The Upendium in 2007 and People with Purpose in 2010), and even, most recently the splendid and typically daft video shown below, but only recently has there been the rumblings of something more substantial with their own 30th anniversary looming.

First on the itinerary (after a couple of aborted gigs last summer as trumpeter Martin Smith was suffering from pneumonia) was this weekend’s gig at the Zanzibar, stalwart venue for the band over the years(in fact a live EP available here was recorded there), an evening compered with some elan by Michael Livesley, a somewhat larger than life persona who is also the lead singer for the night’s support act, Rodney Slater’s Parrots, a Liverpool-based outfit featuring said Rodney, the sax and clarinet playing veteran (and founder member) of the Bonzo Dog Doo Dah Band. The Wizards themselves have sometimes been compared to the Bonzos, but even they, despite their own bonkers vintage, would struggle to compete in terms of jaw-dropping daftness, with jaunty, pleasing ditties accompanied by clarinet, violin, saxes, keyboards, guitar and rhythm section, interspersed with hilarious, stream of consciousness narrative veering between Lancastrian self-deprecation (not to mention the deprecation of band members and audience!) and upper class twittery.

If this was a genuine delight to warm an assembling crowd on the coldest night of the year, then a clearly identifiable collection of Wizards aficionados retained their warmest welcome for the main event. Launching into ‘Eye of the Potato’ (complete with Survivor riff gone horticultural), the band ripped through any number of old classics from the first two albums, be they the spiky ‘Clunksville’, the lush tones of ‘Jazz Ian’, the alternatively soothing and menacing ‘Herod’s Creche’ or the classic Sixties pop of ‘Large Georgraphical Features’. There were also standard set list items from the Ayers era such as ‘Cardboard Banjo’, and ‘The Great Unwashed’. 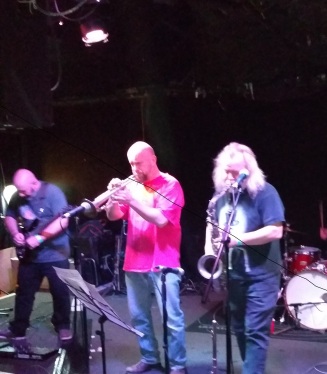 To be fair, given the general bonhomie all around me, and the delicious familiarity of immersing oneself back into the world of the Twiddlies, I can’t remember all the tracks they played, testament to the band themselves so effortlessly stepping back into the groove. What I can recall is at least four new pieces, a typical Simon James track (I’m guessing) based around double standards called ‘Yes We Can’t’ (complete with compulsory audience shouting!), a glorious 60s song in the vein of ‘Large Geographical Features’ (from Frizell?) called ‘The Inescapable’ and two pieces of a more twisted bent, ‘Eryops’ and ‘Sit Down Punch’, the latter a quite stunning groove-based instrumental from the pen of Carl Bowry. It was this which provided my prevailing memory of the night, as the band looked genuinely quite taken aback by the audience’s voluminous response. 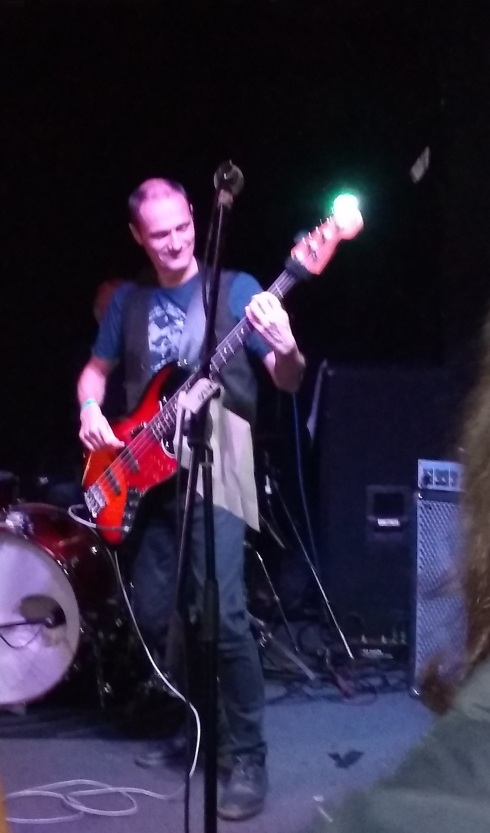 Most of the trademark Wizard features are still very much in evidence: the contrasting styles of the two lead vocalists (with Simon James angrily ranting or Andy Frizell alternatively crooning or impishly sniping); the staccato brass work of James and Smith (whose trumpet soloing is these days quite outstanding); the rhythms driven on in pinpoint manner from the gloom by Andy Delamere’s drumming (he also adds a sweet third voice); or the astonishing guitar work from Carl Bowry, as understated a stage persona as you’ll see, but with a repertoire of blistering effects-strewn assaults on the ears, flying fretwork and subtle harmonics.

Highlights on the night were hearing for the first time that raft of new tunes, the buzzing guitar rhythm and singalong rant of ‘Hooverman’, the evergreen daftness of ‘Septic Tank’, and a re-work of ‘Man Made Self’ as an inevitable finale, as Andy Frizell looks back regretfully (and forgetfully) at his Nineties character’s aspirational self. With various members of the band charging around the stage, screaming into microphones and leaving the arena to tumultuous applause, it was very much like old times…