I first came across Tom Ashurst’s name when trying to find out about the unbelievably good bass player performing with Ozric Tentacles’ main man Ed Wynne at Kozfest in 2017. This jammed gig will long endure in my memory, as a crowd emerging sleepily from their tents around midday on the Sunday ambled into an unexpected treat in the festival’s main tent.  I found out subsequently that Tom is also a phenomenally gifted guitarist, and I caught brief snippets of his performance at the same festival in 2018. He is probably best known however as bass player with the Hawklords.

Then, somewhat without warning appeared this CD. Recorded live last year in Glastonbury, this is billed as a duo gig with Mark Robson, the Kangaroo Moon main man and multi-instrumentalist. Not to denigrate Mark’s own considerable talents but this gig (and album) ostensibly appears to be primarily Tom’s show with some sensitive accompaniment on keyboard and occasional star turn from his more well-known companion. And what an impressive performance this is, in terms of composition, arrangement and particularly execution from a very fine guitarist. The general modus operandi appears to be the building of loops of acoustic guitar, sampled then played in increasing numbers of layers, often with the icing on the cake being a blistering solo. Of all of the albums covered in this particular batch of reviews, this has had the most appeal, intrigue and therefore playtime of the lot.

So what do we have here? Let’s start with the ‘covers’, although these are essentially re-interpretations with varying distance from their originals. Beginning with the biggest surprise, the album is launched with ‘Tales of Taliesin’, the ‘Softs’ guitar epic from 1975 – a lovely acoustic version. They continue with ‘Jacques Cousteau Loves Anchovies’, a track I vaguely identified as a Here and Now Eighties piece (the writing credits to Tha Bass and Da Blitz confirm this). Much more memorable is ‘You Shouldn’t Do That’, a Hawkwind cover with Ashhurst (presumably) providing the looped, breathy vocals that invoke a genuinely hypnotic chant. There is also space for ‘Gypsy’s Lullaby’, which I recognise as a Kangaroo Moon staple, and notable for it being the only track with Mark Robson being front of stage (on penny whistle) – an ethereal mix. But all non-originals are universally trumped by ‘Fohat’, a remarkable acoustic version of Gong’s ‘Camembert’ track, slowly built up through guitar motifs which underpin each other, overlap and provide a pulsating backbeat for the eventual ‘takes a little time’ melody etched out initially via guitar, then through wordless vocal before the crashing conclusion. If I was wowed by a recent discovery of Fabio Golfetti reworking this track with Violeta de Outono, then Ashurst’s version is just as stunning and evocative. 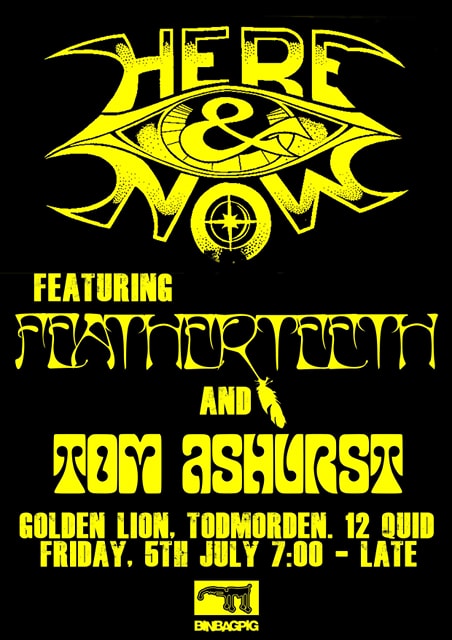 The album is rounded off by three originals, radically different but all impressive in their own way. From the hiphop crash chords of ‘ICRED’, this unfolds into the most unfettered guitar soloing of the album, truly glorious stuff, whilst ‘Dementia Kicking In’ is a bluesy groove a la Pink Floyd’s ‘Money’. The album concludes with ‘Cumulus Nimbus’, a funky piece which put me in the mind of The Egg who I saw many times at festivals in the Nineties: repetitive funked-out danceability personified, albeit that The Egg never had Ashurst’s blissed-out Hillageesque guitar work.

It would be lovely to see how this all pans out live, to witness first hand who this multilevel process works. I’ll get that chance quite soon as the duo perform a support solo slot to Here and Now in my new home town of Todmorden in early July (see above).

In the meantime copies of this truly excellent album are available via Paypal from Tom direct at Tom_ashurst96@hotmail.com for £8+£1 p+p (UK)