I got hold of this remarkable book at the Canterbury sound event back in October (as well as meeting its author, Matt Watkins). Having finally had chance to sit down and read through ‘You Are Here’ I should say that it’s every bit as mind-blowing and informative as I had hoped. 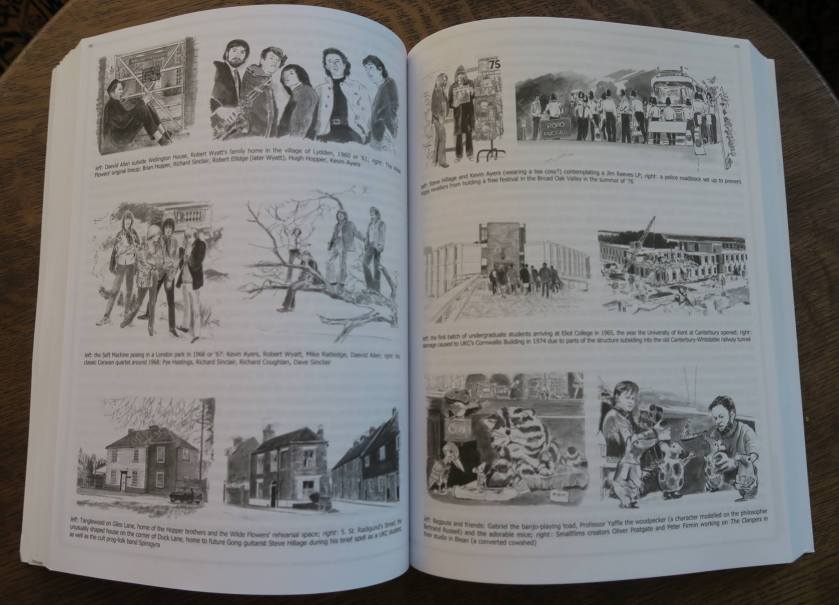 The premise of the book is both unique and bizarre but at the same time guaranteed to draw in any regular readers of this blog. Matt Watkins is, as readers should already know, a champion of Canterbury scene music, as evidenced through monthly podcasts Canterbury sans Frontieres and Canterbury Soundwaves. I also got the impression at the Canterbury Sound event, when he (reluctantly) delivered his talk at the end of the day regarding the development of an interactive ‘Canterbury scene’ Google Map, that he could well be the glue which binds together a modern-day Canterbury music scene within the city. But even that doesn’t really tell the whole story – he is at the same time both a (postgraduate) doctor in mathematics and simultaneously immersed in counter-culture throughout the city (and I expect, beyond). He somehow manages to blend the two  – for example whilst searching on Youtube late one night for a Lapis Lazuli live performance of their wonderful opus ‘Alien’ online a month or so ago, I happened across a most unexpected 30 minute presentation of Matt delivering a talk, in a club, about, ermm…. aliens – this started from the point of view of examining historical media perceptions of aliens right and continued at some pace through to alternative perceptions of reality, Terence McKenna et al (at which point I beat a retreat to bed, my mind fried).

Anyway, I digress. ‘You are Here’ is essentially a study of Canterbury from the year dot to a specified date and time in August 2014. True to his mathematical roots, Matt constructs a perfect spiral timeline (the book’s byline is  ‘an accelerated history’), with two page segments being devoted to each time frame. Initially this means that the timeframes are large (the first being 14 thousand billion to 11 thousand billion BC), but then incrementally shrink (e.g. 1109 to 1292 in medieval times, 1867 – 1897 in the 19th century), to segments of hours, then minutes, then seconds as the book reaches its rather frenzied conclusion.

What this means for the reader is that what starts out as essentially a superb historical document from the Roman era forward, setting out the premise for Canterbury being a totally critical centrepoint for religious and political machinations within England, inevitably becomes something else, as time ‘speeds up’ . From a purely ‘sceneist’ point of view, the segment of time devoted to seminal Canterbury musical activity, let’s say between 1960 and 1972, is condensed to a mere 3 pages. The accelerating nature of the timeframes means that roughly half of the book is devoted to Canterbury in the new millennium, which by extension means that it’s an autobiographical account of life in the city. Matt’s own personal interests and perspectives become relevant here. There’s a fair amount of commentary, or at least noting, of counter-culture,  streetlife, local politics, corporate machinations, and their impact on the local environment, alongside the prevailing themes of history and religion, and in that regard the latter half of the book put me in mind of CJ Stone’s excellent ‘Fierce Dancing’ book, another example of where an account of (counter) culture was to some extent overtaken by the process itself. For those of you who are students of ‘modern’ Canterbury music, the likes of Syd Arthur, Lapis Lazuli and other of the many innovative musicians that are carrying the torch forward in such an inspired fashion, the extended sections afforded to the era from 2010 onwards allows for many references and a myriad of information regarding their activities – all good news…

And so, what until, let’s say the 1990s, is largely a fascinating historical document, is overtaken by an exploration of the minutiae of one community’s day to day life, and then to being a progression to one person’s conscious thoughts, before ending up as an extremely scientific description of how the sound of a church bell is transmitted across nanoseconds of time.

Baffled? Well, all I can say is the piece is a remarkably cogent project that manages to tick many diverse boxes: meticulously researched ancient to mediaeval history, an account of social development through the 19th and 20th centuries, cultural changes in the 21st and latterly a chronicle of one person’s inner thoughts as the reader is hurtled in a rather panicked fashion towards an uncertain conclusion. There’s even a Daevid Allen-like vision at the book’s denouement, which although somewhat incongruous in amongst the general scientific dissection of the closing chapters, adds a further unexpected twist.

Utterly unique, this book is also embellished throughout by beautiful line drawings of many of the key historical events described in the book, some the recreations of artists’ impressions and photographs, as well as, I think some completely original material. Some of these (the musically related ones of the likes of Steve Hillage, Kevin Ayers, Caravan and the Wilde Flowers) you might have seen reproduced already as part of the sparse publicity surrounding the book launch (it’s not officially out until February). The illustrations are largely from Carole J Watkins, who also happens to be Matt’s mother. There are also a series of appendices giving a key date timeline, maps charting the changing topography of the city, and a list of important musical events and releases.

Details of how to get the book (pre-release copies) are at http://youareherebook.com/ – dive in before the official launch date in February!