A couple of years ago, whilst teaching in a secondary school in North Yorkshire, I was struggling a bit to convince a group of disengaged 15 year olds that IT and Computing might be where it was at in terms of their education. In a brief moment of clarity, I devised a task to create a website for a fictitious music festival of their choice. The students decided this would be based loosely around the Beatherder festival, located a few miles down the road over the border in Lancashire. Beatherder had been on my radar several times over the last decade, mostly through my stepdaughter Rosana (below), who’d graduated from being a punter there in her teenage years, on to an inspired but ultimately unsuccessful attempt to win a photo competition for tickets (by posing on the local rock outcrop the Hawkstones sat on a toilet which had been inexplicably concreted to said rocks 350 metres above sea level a few decades back), to this year helping to launch the festival on the main stage as a member of bonkers and monstrously loud 30-strong percussive Hebden Bridge outfit Drum Machine. 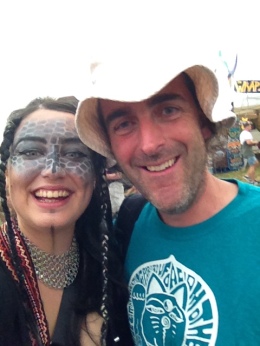 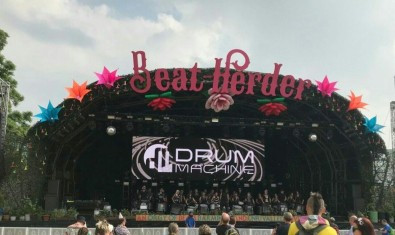 For me, I’d tended to avoid Beatherder like the plague, precisely because it appeared to be something of a coming of age festival for younger residents of most of the neighbouring Northern mill-towns, all of which seemed to empty of youth over the relevant weekend. And also because of the very real prospect of bumping into students whilst we were collectively letting our hair down, so to speak.

So, how did I find myself at Beatherder 2018, you might ask? The simple answer is courtesy of Gong, who somewhat late in the day were announced as headliners for the ‘Perfumed Garden’ stage, a relative oasis within the general melee of the festival at large. Beatherder is well named, a systematic rounding up of likely types with a mission to pummel them into submission through various degrees of dance-based electronica (if various other excesses didn’t get to them first). In amongst 10 or so stages of varying ferocity (the ‘Fortress’ and the ‘Factory’ looked particularly scary), it was rare to catch anything resembling what might class as conventional instrumentation in amongst the knob-twiddlers and DJs. Or at least that was the case beyond the main stage, which (and I’m showing my age here) was also the only stage to display billings which meant anything to me – with Morcheeba, Orbital (who looked to be a class above most other things at the festival), and, ahem, S Club 3 all appearing. In addition, during the course of making an arrangement for Saturday, I’m fairly sure I uttered a phrase I have never said before in my life (nor am likely to ever again), namely “I’ll see you at Boney M”.

For all the said ferocity of the music, the general vibe was pretty convivial, if a little full-on – I’d been expecting plenty of lairyness, but given that it was impossible to wind down any time before dawn due to the ongoing onslaught of beats, I was up and about long enough presumably to get a bona fide warts-and-all impression. What was definitely the case was that at a particular point on Friday evening, in the run up to midnight, a certain ‘type’ of punter started drifting towards the Perfumed Garden. Whether they were aficionados, Gong-curious, or purely accidental tourists, this domed tent, with its own chill-out café room adjoined,  filled up rapidly, increasing tenfold from the previous act, a rather excellent  and questioning funk-based outfit called Barry Gammon and the Midday Incident. 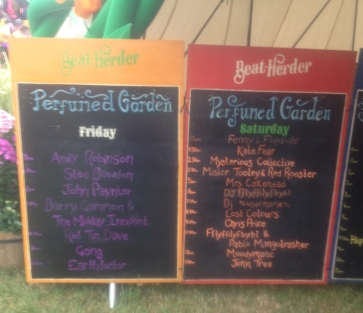 A brief chat with a few of the band members prior to the event revealed that the band had only left London in the early afternoon, been held up inevitably on our creaking motorway system and had just enough time to soundcheck and down some snap before their witching hour appearance. Launching into ‘You Can’t Kill Me’ and following up with ‘Kapital’, there was no better evidence that they now seamlessly switch between the new and the old, sequencing tracks composed 45 years apart with  gusto, spike and menace, Kavus Torabi tossing his wild hair and flashing his eyes around the tent to welcome all and sundry to the fold. The 2016 album ‘Rejoice, I’m Dead’ has now been around for long enough to allow a sober assessment of its merits beyond any initial euphoria about a new Gong release, and in my opinion still represents arguably the band’s finest moment since the Trilogy era – only ‘Zero to Infinity’ comes close. That was reflected tonight in a set list that contained 3 tracks from it, (plus ‘Eternal Wheel’, Fabio Golfetti’s contribution to ‘I See You’, the album this line-up made their collective debut on with Daevid Allen. )

By accident or otherwise (Gong’s normal sound guy was absent tonight, as was their mindboggling light show), the ‘in-house’ sound tonight was VERY beat-heavy, allowing Dave Sturt’s bass to thunder as never before, whilst Cheb Nettles’ polyrhythmic drumming also enjoyed a sharp focus. Ian East’s sax also cut through the dense mix at times, but the uninitiated might not have realised what guitar heroics they were missing, particularly on ‘Rejoice!’, not only on the stupendous double guitar solo which for me was the highlight of the last album, but also in the introductory call-and-response section with sax which was reduced in the sound mix to only half its normal impact. 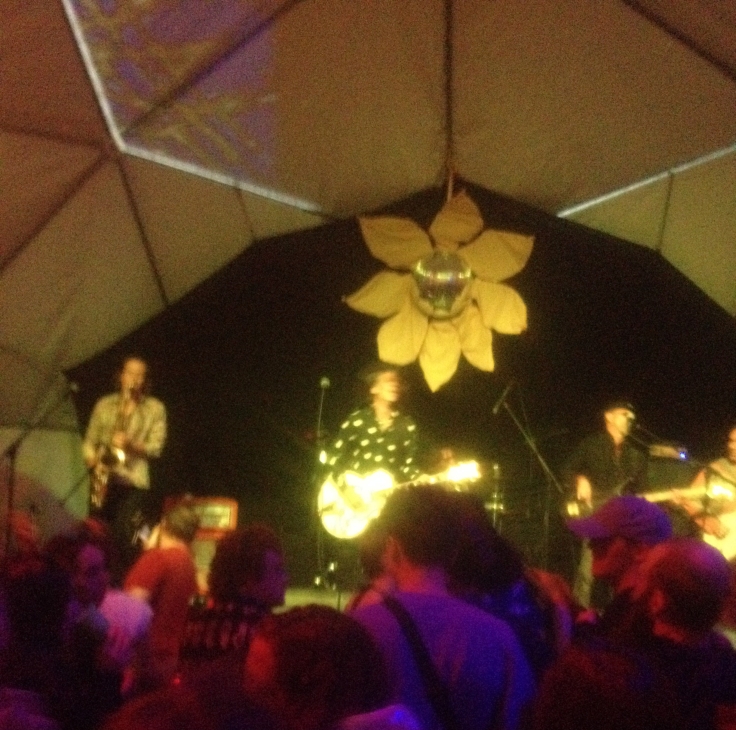 But these anomalies were only probably (train)spotted by us purists – this band have a unique ability to transcend pretty much anything around them with their renditions of two Gong classics, ‘Master Builder’ and ‘Selene’. The former is currently enjoying arguably its best incarnation, with an extended and evocative crescendo, buoyed by Torabi’s alternatively subtle inflections and crashing chords on guitar, even before the band reach the ‘IAO’ chant in 5-part harmony. ‘Selene’ was simply mesmerising, also elongated and appropriated for this band’s dronish version – this one really did take me somewhere else entirely… And, most unexpectedly, the band performed a quite stunning version of the riff from the first track on Steve Hillage’s ‘Fish Rising’ – Fabio Golfetti later revealed that this had been chosen because it had previously been on the Gong set list not long before Daevid Allen imploded the ‘You’ line-up in the mid-Seventies.

The band finished with ‘Insert Your Own Prophecy Here’, fast developing into an anthem for this particular band. This is a far from flawless composition but it has some truly memorable moments, firstly where the guitars of Torabi and Golfetti alternate chords in a striking passage, then gloriously when drummer Cheb Nettles adds his falsetto scat singing to the final theme. Whilst the crowd had thinned a little towards the end of their 90 minute set, festival crowds being more transient than your regular gig crowds, the band were fabulously received, as they fully deserved (although I was asked during ‘Selene’ by one audience member if the band really were singing about sardines (!), whilst another punter never really quite got over Steve Davis being in the audience, making something of a show of himself in the process – the punter that is).

Chatting to the band afterwards, it was revealed that there are some very welcome developments – whilst there has been no major tour this year, the band have played at a choice selection of festivals far and wide: most notably in Finland and China. There are a couple of UK festival dates to come in Cheltenham and Kent, before tours in Japan and Canada later in the year with Steve Hillage on board`. Even more excitingly, the band are currently writing new material, to be recorded as an album in November, hopefully to come out in 2019 (with gigs to follow?). Part of a new vocal line had been sneakily tried out during ‘Prophecy’, Ian East later revealed. 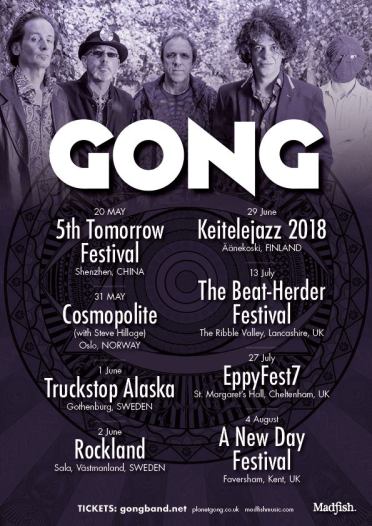 Whilst the bulk of the band hit the road back down to London in the wee small hours, Kavus Torabi stayed on with Steve Davis to perform one of their eclectic DJ sets 24 hours later on site, by which time I’d long since retreated back to home comforts. But not before accidentally bumping into one of those scholars mentioned at the top of this review during a relatively benign drum and bass gig on the main stage. He looked at me in sheer consternation, jaw dropping to the floor, as he blurted out “What are you doing here, sir”, before scuttling off, perplexed, into the safety of the masses… Proof that education does occasionally have its place…

3 thoughts on “Gong at Beatherder Festival, Friday the 13th of July”