Perhaps it’s surprising there’s never been a Kevin Ayers biography. In many ways, of the all the Canterbury scene artists, Kevin was the one flecked with stardust, the one who (almost) transcended into the mainstream. Yet in most Canterbury scene accounts Kevin is almost forgotten, his exposure limited to his involvement with Soft Machine’s pioneering psychedelia, or perhaps to the lunacy of the Whole World. Conversely you will often come across people outside of the scene who have an attraction to Kevin without any affinity to where he came from musically.

The closest there came to a biography was Martin Wakeling’s ‘Why Are We Sleeping’ fanzine, and because Martin became a close friend around the time of Facelift’s infancy, I received a kickstart education in Kevin’s history, his foibles and his tendency to disappear to the sun at the point at which he was just about to assume star status. Kevin collaborated with contemporary musicians I knew and loved in the Nineties: the Wizards of Twiddly and Ultramarine, and through the former (who had become his backing band) I attended many gigs which combined consummate musicianship with his own languid charm. I was aware anecdotally that this didn’t reveal the full story and by the  last time I saw him, in 2006 in, of all places a snooker club in a fairly rough suburb of Manchester he had retreated so far into his own bubble that the only lights he would allow were those from the emergency exit door. It was still a fabulous memory. In the last few years I’ve become fascinated by the Deia connection which embraced principally him and Daevid Allen but also many others with Canterbury scene connections, and so soon after a recent visit (where I chatted with people who knew him well) it feels particularly relevant to see this compendium. 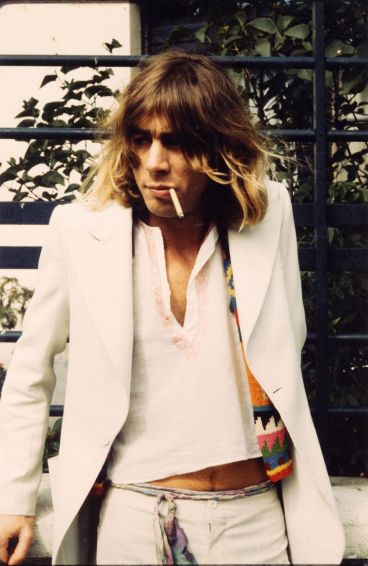 So – whilst ‘Shooting At the Moon’ is not a biography, it is at least a long overdue recognition of Kevin’s talents by someone in the best position to appreciate them – Kevin’s daughter Galen, herself a musician, now based in the States (she has recently released an album called ‘Monument‘). Various interviews surrounding the release of this book have painted a warts-and-all picture of the relationship between Galen and her father, or more pertinently the reality of propping up a character whose disarming demeanour masked a considerably more complex story. This is not an attempt to either hide or embellish the complexities of Kevin’s persona, it is instead a charming coffee table selection of lyrics from all Kevin’s solo albums, beautifully presented, with as many lyrics as possible presented from Kevin’s beautiful own handwriting (whether or not these were transcribed at some point for such a purpose as this book, an aide memoire for concerts, or even originals is not clear, although there’s a fascinating amount of material that was clearly work in progress at some point).

The book is full colour, softback with lavishly reproduced publicity photographs, photostrips, marketing material, press clippings and some clearly from Galen’s and others’ personal collections. Each album is represented chronologically, a song to each page, with each release accompanied by at least a couple of artefacts and preceded by a quote, either from Kevin or his collaborators. Galen sought out fans’ feedback around 6 months ago about what Kevin meant to them and some of these thoughts are collated at the back of the book as well as various artefacts such as gig tickets which arrived presumably at the same time.

There are introductions to the book, an eloquent summary by John Payne, a succinct and loving note from Robert Wyatt, and some personal thoughts from Galen, although her personal mark is in fact all over the project in its lovely presentation, alongside some touching photographs of her and Kevin together in her childhood. I suspect if Ollie Halsall had still been alive, he would also have contributed – pictures of his collaborations with Kevin are conspicuous and the Deia connection is captured pictorially on many occasions. 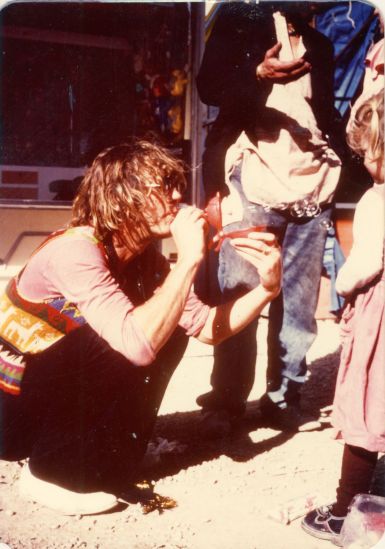 And if I’ve not commented on the lyrics themselves, then I’ll leave them to you in their entirety to peruse and dissect: often their languid nature mirroring the laid-back nature of the songs; the lapse into silly ditties Syd Barrett style (although Kevin’s were always more knowing); the occasional wry philosophy; the stories of the bon vivant and the lover in his many guises; the cod-tropicana; and the blues-tinged self-references. The one time I did meet Kevin at close quarters, for his live session with the Wizards at BBC Radio 5 with Mark Radcliffe, in one of the most memorable musical evenings of my life, he was effortlessly charming, witty and somewhat baffled by the hectic nature of the furore he had created around him. He craved privacy but attracted adulation. I hope he would be proud of the body of work preserved so lovingly for him here. 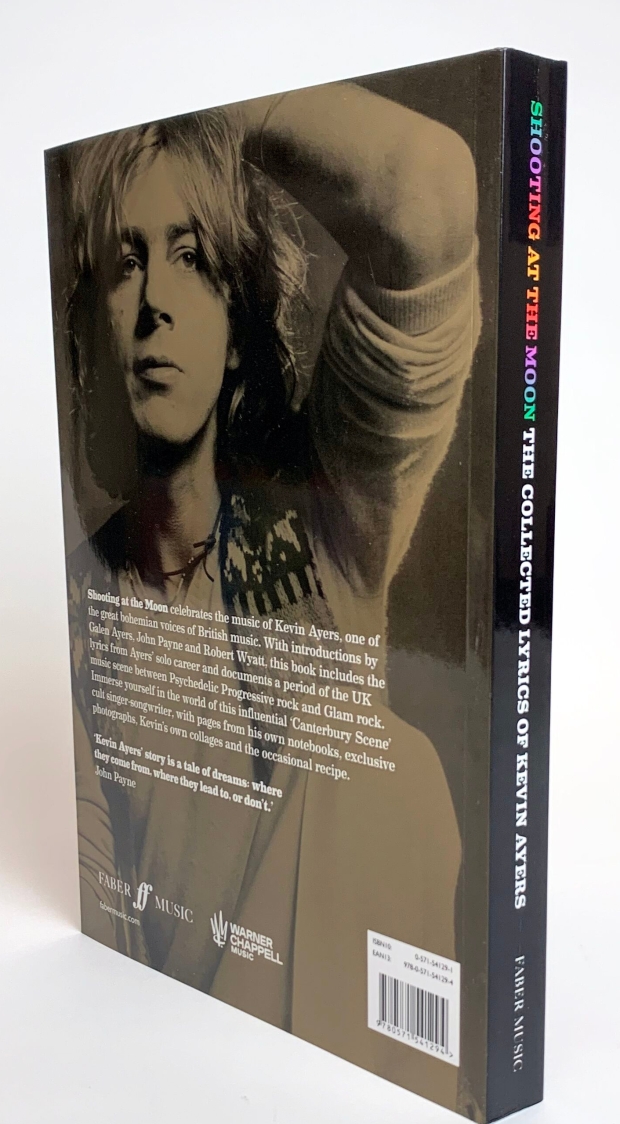 Order signed copies of ‘Shooting At The Moon’ at

http://www.galenayers.com – where you can also buy Galen’s album ‘Monument’

Alternatively order direct from the publisher at