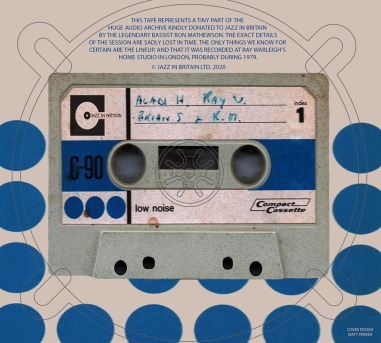 This previously unreleased session from four established British jazzers was unearthed as a byproduct of research for the Ed Chang’s Allan Holdsworth biography ‘Devil Take The Hindmost’ by Jazz in Britain, and represents part of a series of projects which encapsulates a lesser known aspect of Holdsworth’s history which Facelift first explored in issue 2 as far back as 1989. There was a period right at the end of the Seventies, largely before his movement towards solo bands and compositions, and intertwined with his bread and butter work as a blindingly brilliant solo guitarist, when there existed a parallel universe in which Holdsworth was involved in freeblows with key improvisers from the British jazz scene including John Stevens and Ron Mathewson. It is the opening up of the latter’s extensive archives for Jazz in Britain which has produced this particular slice of history. Memories are so vague that the session cannot even be accurately dated, although the best guess is 1979 or 1980.

In fact the genesis of this particular recordings could be traced back much further – when I interviewed Allan Holdsworth back in 1994, he talked of a particular period in his life when, in the middle of a three year stint in the very early Seventies as a jobbing musician for the Glen South Band, he attended a jazz workshop and met Ray Warleigh, who offered him a room in his house down in London should he ever decide to relocate – which he subsequently did, opening up a whole host of opportunities which led on to Nucleus and then beyond… Appendices in the forthcoming biography also allude to BBC sessions with double bass player Mathewson and drummer Bryan Spring going back as far as 1972 and 1974 respectively. 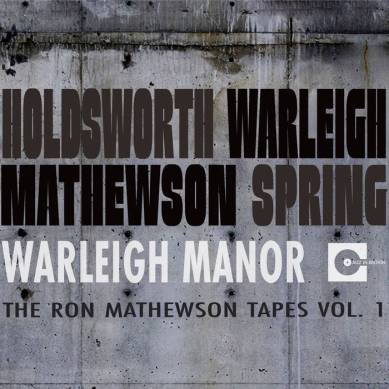 Whilst ‘Warleigh Manor’ is very much in the manner of those late Seventies John Stevens freeform blasts, it’s  softened considerably by the joyous nature of Ray Warleigh’s performance, initially through his warm, florid, flute (Soft Machinists will be familiar with his appearances on ‘Bundles’ and later ‘Land of Cockayne’) but also through tenor sax which alternately squawks and croons. On the opening track (‘Warleigh Manor Part One’) the initial bursts are pretty much one player soloing at a time, flute, semi-acoustic guitar and bass, before eventually this hardens into tenor sax and hitempo guitar flurries. We do eventually get the expectedly difficult high intensity listening, somewhere between the full on blast of Stevens’ ‘Touching On/Retouch’ projects and the sometimes mellower collaborations with Gordon Beck but it is Warleigh bringing the piece back to some semblance of melody which rescues the listener time and again. 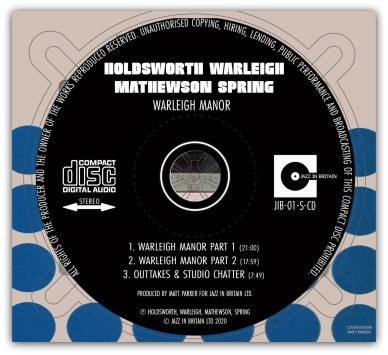 Interestingly enough, Holdsworth spends most of ‘Warleigh Manor Part 2’, another track in excess of 17 minutes, on violin – the only time I can instantly recall him playing that is for very simple motifs on ‘Flight Part 4’ on Gordon Beck’s magnificent ‘Sunbird’. Here he plays more adventurously in a 3-way somewhat manic workout with flute and double bass (Mathewson’s bowed sections here are probably the highlights of his contributions on this album; drummer Spring is generally well down in the mix), before the piece eventually settles back into more considered tones with guitar with even some reflective passages. But there are no easy gains here.

Track 3 is a series of ‘Outtakes’ featuring some truly superb flute soloing over walking bass and relatively conventional guitar patterns. As the title suggests, this ‘piece’ is broken up by studio discussions, which, depending on your viewpoint either gives either context or possibly frustration to what could well have been the highlight of this album. But any doubt that it is Warleigh who is the clear star of the show is dispelled with more memorable flute passages throughout the bonus track ‘Do It In Two’, where, with the most established swing rhythm of the album, Holdsworth also briefly starts what probably constitutes his only conventional solo of the album, away from what appears to be a standard diet of improvisational counterflurries, before he appears to have second thoughts, allowing flute to come to the fore again.

If the glory here is Warleigh’s (a real revelation for me) then this is still a fascinating further opportunity to see the lesser spotted Holdsworth in his late Seventies freejazz alter ego. And it whets the appetite nicely for further discoveries both within and beyond the forthcoming biography.

And the biography here:

DEVIL TAKE THE HINDMOST – The Otherworldly Music of Allan Holdsworth